We spent most of the summer at Cross Creek Campground Resort (CCCR) which is next to Alum Creek State Park near Delaware, Ohio. We stayed from June 3rd through August 25th, 2022, on the same site full time. We took car trips back home to Dayton, Ohio area frequently to visit friends/relatives who live in the area.

Everyone who worked at the campground was very friendly and helpful.  We all enjoyed our stay, including our three dogs.  Molly, our mixed lab we got from a shelter as a pup didn't make it through the entire stay though. She was diagnosed with cancer before we left Wilmington, NC to come back to Ohio. You can read more about Molly at her Tribute Memorial Site if you wish.

I got into the pool here at the campground at least once after a hot and frustrating day of cleaning up after a Great Dane who had diarrhea, so I could cool off and rest.  I planned on getting into the pool more before we left and was hoping Deb would get into it as well. Pool always got pretty crowded during the weekends, so we pretty much only got in during the week when there weren't as many campers at the campground.

We still had our cherished campfires, cookouts, and walked the dogs a lot. We still enjoyed the amenities of home like TV, Movies, Internet, and Music.  After all, the Motorhome is our home.  It goes with us wherever we go except for when we have to travel via air for vacation away from the Motorhome.

We had to stay in a hotel when our rear AC unit died after a storm passed through right about our second weekend at the campground while we were having heat indexes going over 100 degrees. We did go back to the Motorhome during the first weekend since it cooled off but ended up back in a hotel after the weekend when the heat wave hit again.

It took a shipment of 4 AC units to finally get a good AC unit to replace the original AC unit that died. The time frame went from around June 14th up until July 25th to finally get a good serviceable unit in place in the bedroom of the Motorhome to keep it cool. Felt sorry for the AC repairman climbing up and down on the roof each time only to find out the new AC unit he just installed didn't work.  The second unit he put in actually worked for 5 days but then died. We went out and bought one of the portable floor AC units that vent through a window so we wouldn't have to go stay in a hotel again.  While that helped, it wasn't really like the AC should be when both the AC units on the roof are running. Since we couldn't vent the portable AC unit through any of the Windows in the back of the Motorhome, we had to put the portable AC unit next to one of the sliding windows in the cab to cool the living room area and close all the vents from the roof AC unit in the front so the air would blow through the open vents in the back of the Motorhome.

After all was said and done, the AC repairman sent me a picture of the bad AC units telling me he was calling it "Smith Tower". 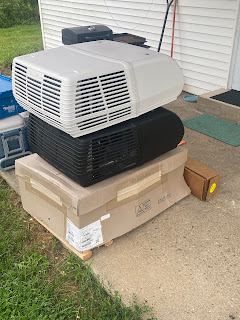 We had put up our dog fence and had expanded it out to the edge of our site before we were told we had to take it down.  We were told we were allowed to put it up temporarily for training purposes but had to take it down when training was over.  We were told everyone who had fences were told the same thing.  It was disappointing though, to see when other people came in, they put up fences and weren't told to take them down so we said something and was told those people would have to be told to take them down as well.

Overall, we enjoyed our time at Cross Creek Campground Resort despite the fence issue.  We just tied our dogs to the torch stakes so they could sit out by the fire with us, and they seemed to be happy with that.  The ideal situation would have been to be able to use the fence so our dogs could roam freely on our site, but people are afraid of our big dogs.  I guess they think they will jump the fence and come get them, but deep inside they are the same as the little dogs and wouldn't hurt anyone, unless of course someone were to attack us, and they could see we were in danger.

I was impressed by one young lady who I nicknamed "Barefoot Blacktop Walker". No lie, when it was close to 100 degrees this girl was walking barefoot on the blacktop.  I had to ask her if it burned her feet and of course she said no.  I told her she must not have any feeling in her feet.  I bet she could walk on burning coals like you hear about and see in movies.  I only saw her with a pair of shoes on once, and it was just before she left for school.

Below are pictures we took while we were at Cross Creek Campground Resort. Enjoy!

Pics of the dogs enjoying the campground. 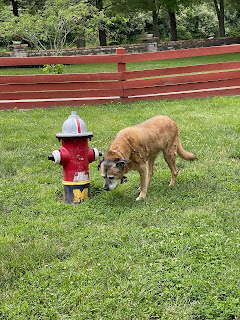 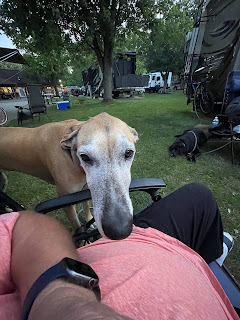 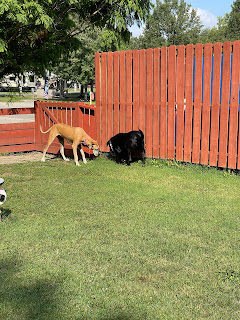 We spent most of the summer at Cross Creek Campground Resort  (CCCR) which is next to Alum Creek State Park near Delaware, Ohio. We stayed f...